Alan Mullery:
The day after our win over Romania, there was a training session for all the squad players who hadn’t taken part. The rest of us just strolled around and had a massage to loosen our muscles… but the following day we were back in full training with the rest of the lads.

We found out that we could go to the hotel where the England team was staying and have a drink there. So, we got there, and it was already pretty full because word had got around amongst the England supporters. But we managed to get in passed the doorman. Some of the England players were sitting around one of the tables. I remember that there was Peter Osgood, Geoff Hurst and Bobby Moore – and, with them there’s the singer, Susan Maughan who did ‘Bobby’s Girl’*. Anyway, we got some beers, and soon loads more fans started coming in. So, the players started telling the security who could come in, and who couldn’t. Then we see Billy Wright, Bertie Mee & Don Howe at the door – you know, trying to get in. But the England players wouldn’t let them. The doorman had got the attention of Peter Osgood, and Osgood looks round and sees Billy, Bertie and Don, and he shakes his head to the doorman. So, the doorman doesn’t let them in! And I hear Osgood say, “Boring bastard” – or it might have been “Boring bastards.” Whether he meant one of them or all three, I don’t know. I did get a dollar bill signed by them though (Wright, Mee and Howe), but I had to spend it because I ran out of money!

The players weren’t getting up to no good though. Alf wouldn’t have allowed it. They had massive respect for him. He was God.

So when we headed back to our hotel it was pitch-black. And we’re walking along – no pavements – just the car headlights to help us see. And there’s this sort of ‘crunch, crunch’ as we go – like with our footsteps. And we’re thinking ‘What the bleedin’ hells that then?’ And when this car comes with its headlights, we look down and we’re walking on cockroaches. Millions of them! So, we jumped onto the grass verge.

* released in 1962, spending nineteen weeks in the UK charts and peaking at No. 3 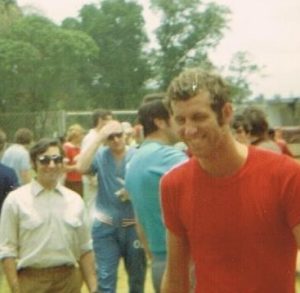 Patrick Burke:
Between one of the games we went to England’s training ground where Harold Shepherdson, the trainer, asked us inside to act as ball boys. It was a fascinating experience seeing the players close up. Players such as Peter Osgood and Emlyn Hughes looked so young and fresh. Even now, I find it hard to believe neither reached 60 years of age. I read somewhere that seven of the England squad have since died compared to only one of the Brazilian side – and he died in a road accident. 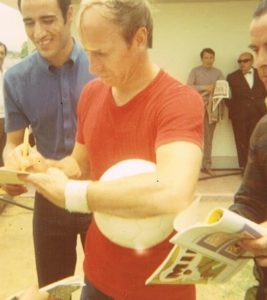 I recall on the training ground Bobby Charlton taking shots from 30 yards in his bare feet. But what struck me most was the speed of play, even in a 5-a-side match. I don’t think the ordinary spectator in the stands really appreciates how quick the game is. A player would receive the ball with the nearest opponent some 10 yards away. From seemingly nowhere a tackle would come in. That memory always causes me smile when I hear on TV a commentator saying that a player had all the time in the world to score. No, he didn’t! You wouldn’t get within a mile of being a ball boy now days. We probably didn’t appreciate how lucky we were to do this at the time. 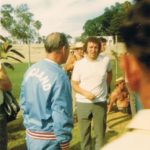 Stanley Lewis:
We saw the England boys training. The hotel just let us in to watch them I remember Frank McGhee. He was a columnist for the Sunday Mirror. Big black moustache. He was talking to Bobby Moore and we was all sitting round – beer in hand… And he comes over to us and says, “Alright lads? How are you doing?” – and all that. And we say, “Not too bad.” He says, “D’you play for anybody?” We say, “Nah. Nothing like that.” 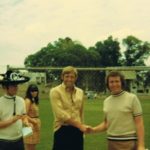 Patrick Burke:
We went along to the Brazilian training ground as well; but, not surprisingly, we couldn’t get in. We spoke to Billy Wright and Alan Ashman, the West Bromwich Albion manager, outside. However, we managed to see the Brazilians from a distance as some England supporters were in a hotel overlooking the training ground.

Stanley Lewis:
One time we were walking down to this supermarket near the hotel. And we see all these players on the veranda [of another hotel]. And my mate says, “That’s Brazil over there.” And I say, “You what?” But it was the Brazil team. They were staying there. So, we looked down the side of the hotel. And the grounds – they went right back. They had football pitches and everything. Anyway, we get to the supermarket – gigantic place, and we’re walking around, and there’s this bloke. Big tall geezer he was. And were walking down one of the aisles and he says, “Excuse me. Inglaterra?” And we go, “Oh yes, yeah. Football.” Then we carry on and don’t see him until we’re down another aisle and bang, we bash into him again. And he goes, “Who do you support?” And my mate Kerch-ey says that he’s Arsenal. Cobby Jones – well he never supported anybody. And I go, “Millwall.” And the fella he says, “Millwall? Who is Millwall?” Turns out this fella’s a Brazilian chief-of-police. We’d see him again… 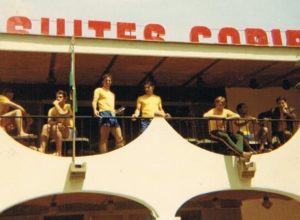 Anyway, I got a camera at the supermarket, and on our way back we passed the hotel with the Brazilian team again. It was the first picture I took. The Brazil players. You can’t tell who they are because we was the other side of the road.

Peter Logan:
During our free time the E.F.S.A. (England Football Supporters Association) had organised some trips, and one was to a reception somewhere, where we were wined and dined, with a local mariachi band group playing in the background. In the gardens of the building I can remember seeing banana trees growing, laden with fruit. 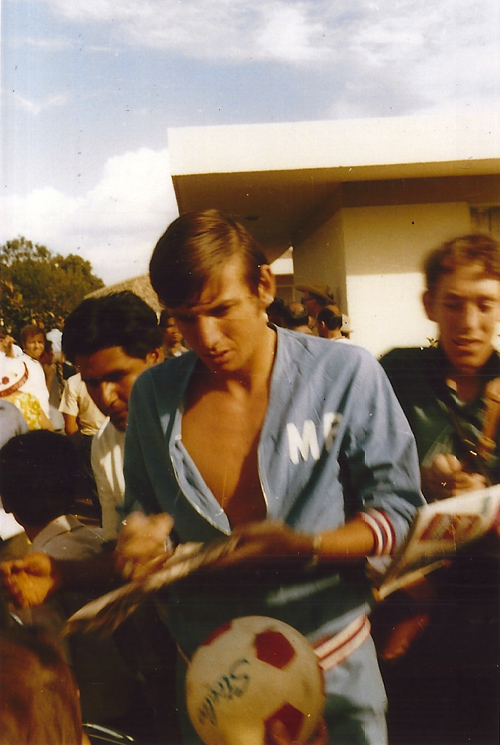 Jasper Cook:
On one occasion – though I can’t actually recall when exactly – we stopped at the same hotel that the England players had stopped at. So we went into the garden at the rear and I was sat there having a drink and a sandwich, and the England team was in their tracksuits walking across for lunch. 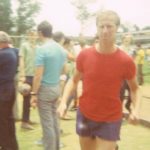 That’s when I spoke to Jackie Charlton who had been in the Horse Guards at the same time as me back in our National Service days. We chatted about those old days for about 10 minutes. He had been captain of the regimental football team and Leeds United always had to request that he could be released on Saturdays to play for them. That was the same back then for all the pros. The players’ mood was good.

Patrick Burke:
Another time, we were invited to the England team hotel, which I think was the Hilton. Some drinks and a mariachi band were laid on. A know some of the supporters had their photo taken with players and I remember the pop singer, Susan Maughan, was in the swimming pool. Whilst we were there, I had an argument with another supporter. He had hitchhiked down from Canada and derided us as we had come the ‘easy way’ – i.e. a package with flight and hotel. I retorted that we had come the hard way as we had been saving for the previous four years, taking on extra jobs and doing all the overtime going. As far as I was concerned he had come the easy way as all he had done was to sponge off other people.

Stanley Lewis:
Can’t remember when – Might have been that evening. But we were in this bar and the big Brazilian Chief-of-Police is there – the fella from the supermarket. We get talking and he says that he’s going to Puerto Vallarta (a coastal resort). And I told him that we were thinking of going there as well. And he said, “If you’re there I will see you.”

Peter Logan:
Apart from that and going to the games, we just spent our time pottered about really.

Patrick Burke:
The rest of the time, I can’t remember specifically what we did but probably spent most of the time around the pool at the motel. We did used to play a bit of football as well though.