Peter Logan:
The next day we headed down to Mexico City. I think that was already set-up as part of our itinerary – though I’m sure we would’ve been staying in Guadalajara had England been playing the semi-final there..

Stanley Lewis:
We went by coach from Guadulajara.

Jasper Cook:
We then had tickets for the semi-final in Mexico City – Italy v West Germany. Virtually all our lot from the motel were booked all the way through. Even though England was out we were still part of this big adventure.

Peter Logan:
People on the coach still couldn’t believe England had lost. I picked up more information from the people who’d been to Leon for the game.

Jasper Cook:
We travelled some 300 or 400 miles by coach. It was a long journey.

Patrick Burke:
We travelled down to Mexico City by coach along winding mountain roads. It took about twelve-to-fourteen hours.

Peter Logan:
The roads were pretty dusty – even in parts of Guadalajara they were unmade roads. The highways between cities were sort of half-and-half.

Stanley Lewis:
Our hotel was on a busy main street. Near enough to the middle. Centre-ish. There was a big square nearby.

Jasper Cook:
We found ourselves in Cuautla, a small spa town up in the hills some 60 miles south of Mexico City. This was our new base. It was the only time the organisers of the trip got it wrong. The thing was the hotel they had booked us into was awful. We all got together and our courier said that there was nothing they could do, and we said, “Well you’d better do something because we’re not staying here!” It was almost like a Salvation Army soup kitchen! They got us transferred.

Peter Logan:
We eventually finished up in a motel in Cuernavaca, which was a fair way outside Mexico City. Probably about an hour-and-a-half from the centre.

Patrick Burke:
We were in a motel about 50 miles outside Mexico City. It had grounds in it. 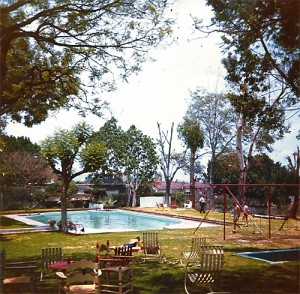 Peter Logan:
The motel accommodation was excellent; with everything we needed close at hand. A swimming pool, we all had our own rooms – you know like two to a room. All the meals were laid on.

Jasper Cook:
I immediately found the local Mexicans to be much more friendly towards us. Perhaps it was because England was now out, or because the snub to the Guadalajara officials was felt less acutely in this area. Whatever the reason, the final eight days of my stay were spent in more cordial and relaxing surroundings.

Patrick Burke:
It wasn’t all football by the way. Some of us took in the culture, believe it or not. I don’t recall any lager-louts then! They’d organised mini-buses for us and we went to art galleries and the Aztec pyramids.

Peter Logan:
Sightseeing trips were arranged as usual, and one I can remember well was the visit to the Aztec Indian Pyramids. They were massive and the steps to the top were very big, bigger in fact than the terracing steps behind the goals at the old Wembley Stadium.

Patrick Burke:
We took a tour of the city and we went past a cinema in Mexico City, which had a big poster outside of Peter O’Toole’s latest film ‘Adios, Senor Chips’.

Stanley Lewis:
I didn’t look round Mexico City much. I was never a walker. Went to Rome a couple of years ago and we went to the Vatican. And the walking I done in there… Well, it nearly killed me!

Jasper Cook:
The trip revolved around three things really – Canada Shoes (an international footwear company), Coca Cola, and the ‘peasant’ population – many of who didn’t own shoes… We stopped outside the home of, I think, the owner of Canada Shoes. Outside there were Rolls Royce’s and chauffeurs – it seemed two or three deep. Actually it seemed half the adverts I had seen on the television were for Canada Shoes and the other half were for Coca Cola.

Peter Logan:
Coca Cola was a universal thing, you know. There were adverts for it everywhere.

Jasper Cook:
They didn’t even wait for the proper advert breaks during football when advertising Coca Cola on TV – they just ran the adverts over the top of the game while it was actually being played. It was almost subliminal – a glass of Coca Cola appearing on the screen and somebody shouting ‘Drink Coca Cola!’ – then it would vanish and you’d be back at the game.

Patrick Burke:
We didn’t come across many (other) fans in Mexico City. In fact it might be true to say that in those days’ supporters didn’t travel in vast armies. Even in those days we took more fans than anyone else I think.

Peter Logan:
I was a bit deflated because England was out but footballs football isn’t it. I was still up for seeing some football. I’d go and watch football anywhere. It was a new place; we were going to a new stadium everyone had heard about beforehand.