Stanley Lewis:
We went by coach (to the stadium). I did notice that there was no sort of decorations anywhere to say that there was a World Cup going on. Thing is – if you’re a football fan, you know it’s happening. If you’re just an ordinary person on the street, you don’t give two monkeys. 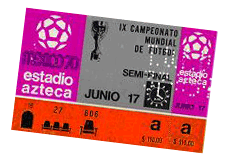 Patrick Burke:
We travelled by coach to the stadium. I don’t recall any kind of World Cup fever in the streets. Perhaps it was there and I’ve just forgotten about it. Perhaps it was because the Mexicans hadn’t done too well themselves. Things tend to come alive when the host nation does well.

Stanley Lewis:
It was me who wanted to sell our tickets. I went with a mate two years later to the Olympics (In Munich). We only done it on a spur-of-the-moment kind-of-thing. We never went to any of the finals. Only got to the qualifying stuff. One time we had these tickets for the Fencing, and we thought, “Who wants to go and see fencing?” So, I said to my mate, “Give me your ticket and I’ll shift them.” So, this bloke comes up and says, “What d’you want for them?” And I say, “Face-value.” Deal done, and away he went. Easy. That’s what I wanted to do with the Aztec tickets. But Kerch-ey went, “I ain’t come all the way to miss stuff!” So, we went in. Mind you, ‘Cobby’ Jones – he wasn’t bothered one way or the other. He’d got the ‘stamp’ in his passport. He just went with the flow. Don’t think he ever went to a football match after the World Cup either!

Peter Logan:
As usual, the coach took us there and dumped us outside the stadium and just let us get on with it. 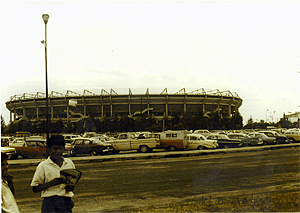 Stanley Lewis:
Breathtaking… Huge… Guadulajara was a big stadium but this was bigger. Went up higher.

Jasper Cook:
I think it was built by public subscription and all the way round on one level there were private boxes, which were owned, and you drove straight up to them. You literally drove straight up to your private box. Of course, we didn’t get the opportunity to go to any of these. I think we entered the stadium from about half way up.

Patrick Burke:
I had no trouble finding my seat – high up in the stadium behind one of the goals. The policing and stewarding was ok.

Jasper Cook:
We were sitting very high up in the stand and my balance has never been the best of balances – and it was frightening. You were sort of looking straight down onto the pitch. 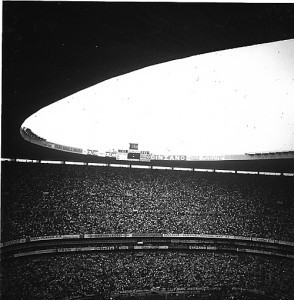 Inside the Aztec Stadium © Peter Logan

Peter Logan:
It was a brilliant stadium except we was too high-up. You couldn’t pick-up the individual players.

Stanley Lewis:
We found our seats about half way up. Between top and bottom. About half way. Not on the half way line – but to the side of it.

Patrick Burke:
My feelings weren’t completely neutral. I wasn’t anti-German or anything like that and I wanted to see a European team win the tournament.

Peter Logan:
I didn’t really worry who won. It was a game as far as I was concerned. As a neutral I just enjoyed it. If your own team’s involved its different.

Stanley Lewis:
I wasn’t supporting either team. We were out. It didn’t matter at all to us. We were happy to be there. Just enjoying the football.

Patrick Burke:
But we were sitting next to Italians so we supported them.

Jasper Cook:
We were at the Italian end. I was naturally supporting the Italians – not because I was in their end but because even if German fans had been next to me there’s no way I’d have supported them. No question! If I’d been in the German end I still would have been supporting Italy – but I would have kept very quiet about it.

Peter Logan:
I think it was a real mix of fans around us. They were from all over the place.

Patrick Burke:
I don’t think the atmosphere was feverish or anything like that. After all, there weren’t too many Germans or Italians present.

Jasper Cook:
It was amongst the most exciting game I’d ever seen without a shadow of a doubt. It was incredible – absolutely incredible. It helped, of course, being a sort-of neutral.

Patrick Burke:
It was another classic. One of the best games I have seen for excitement.

Stanley Lewis:
It turned out to be the best game. By a mile. Probably the best game I’d ever been to. Unbelievable! And I was the one who wanted to sell our tickets!

Jasper Cook:
It was a game the Germans should have won comfortably within the ninety minutes. The goals scored in extra time would probably not have been scored in normal time, against defences which by then were almost completely exhausted, players dropping with cramp all over the park. The atmosphere during the extra time period was electric. All around us people were almost collapsing with excitement as the goals went in.

Stanley Lewis:
What won it for Italy was when Beckenbauer was injured. They’d used their subs I think, so they had to keep him on.

Peter Logan:
It just see-sawed backwards and forwards – one team winning then the other… There were some brilliant goals there.

Jasper Cook:
We were just sat there soaking up the atmosphere. When the final whistle came players were collapsing from exhaustion and in the Germans cases I am sure from sheer disappointment.

Patrick Burke:
We probably had tickets for the West Germany v Uruguay third place play-off, but didn’t go. We thought it wasn’t worth a 50-mile trip on a road that twisted and turned along the mountainsides for a game that meant nothing. They could drop the game really.

Jasper Cook:
I’m not sure whether we had tickets for the Third Place Play-Off. We certainly weren’t interested. We wouldn’t have wanted to go there and see the Germans win anyway!

Peter Logan:
We didn’t bother to go to the 3rd place play off. Again it was a lot of travel.

Patrick Burke:
Nobody remembers who came third anyway. Nobody cares. We had no interest.