Alan Mullery:
We all had breakfast and were sitting on the coach by 10.30am… we were still supremely confident; we knew we could beat the Germans.

Patrick Burke:
The stadium (the Estadio Nou Camp) was alright – but a come-down from Guadalajara

Jasper Cook:
It was quite a small stadium – very ordinary. I don’t think it was a full house either.

Stanley Lewis:
The coach took us from the hotel to the ground. What a khazi of a stadium it was. When you went to the toilets it was filthy. Horrible!

Patrick Burke:
It was a lively atmosphere but the stewarding and policing was ok. Because the Germans had played their group games there, I think they’d made a lot of friends with the locals.

Jasper Cook:
I don’t remember any problems with stewards. We were outnumbered by the German fans but not badly so. The only reason we were outnumbered (generally) was because of this possibly anti-England feeling. But, as I said earlier, the Germans – like the Brazilians – they were fated by the locals because they did all the right things. They got that right and England didn’t.

Patrick Burke:
We found our seats ok. It was in the open.

Jasper Cook:
We were behind the goal. The one where Gerd Muller scored the winner… He literally hadn’t looked like scoring until he got that winner.

Patrick Burke:
I was behind the goal where Beckenbauer scored – and Muller scored the winner… 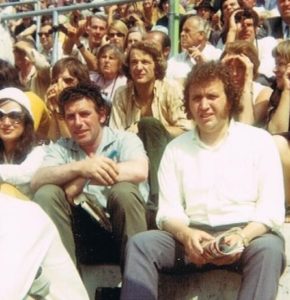 We were behind the goal – sort of nearer the corner flag.

Jasper Cook:
I thought the conditions made it essential that England play with an extra mid-field man. But it was unexpected and individual lapses that put us out.

Stanley Lewis:
We heard somewhere that Banks had been nobbled and Bonetti was playing.

Patrick Burke:
I didn’t know about Gordon Banks – that he wasn’t playing. I don’t think I knew until the teams actually came out for the game. Players – as I recall – didn’t used to come out for a warm up before games in those days.

Jasper Cook:
We didn’t know about Gordon Banks not playing until we got there. Possibly when the teams came out onto the pitch. The decision was made very late.

Peter Logan:
Back in Guadalajara, the word that Banks wasn’t playing sort of spread amongst the England supporters that was there. Of course, none of us knew or could understand why…

Patrick Burke:
I don’t remember any particular reaction. Nobody saying “Oh blimey, Bonetti’s in goal…” No, nothing like that.

Jasper Cook:
Peter Bonetti was a good goalkeeper. I never really had doubts about him. But with Banks – especially after that save against Brazil – it might have been different. Who knows?

Alan Mullery:
I would have picked Stepney for the game ahead of Bonetti… He had won the European Cup with Manchester United two years before and his big-match temperament was excellent. Don’t get me wrong, Peter Bonetti was a first-class keeper, but I don’t think he was the right choice on the day.

Jasper Cook:
I can’t remember the game itself in great detail.

Patrick Burke:
It was a classic game played in a hot house…

Peter Logan:
We couldn’t listen on the radio, so the only means of knowing what was going on was from the stadium scoreboard in Guadalajara… It kept us up to date with the scores but that was it. We didn’t know what was really happening. So – although we were watching Brazil beat Peru – most of the time our eyes were on that…

Jasper Cook:
I do remember, however, that for most of the game we were superior to the Germans. Even the biased Mexicans were silenced by half time, and had lapsed in to bursts of applause at the quality of our play. It’s fair to say that at half time it felt that we were literally on the coach to the final…

Stanley Lewis:
When I braved the toilets at half-time, there were all these Germans, but it was us doing all the chanting because we was winning 1-0. It comes back to bite you on the bum though, doesn’t it…

Alan Mullery:
Keith Newton’s angled pass to the edge of the six-yard box was perfect. The minute I hit it, I knew it was a goal. The ball flew past German keeper Sepp Maier… We were one up and on our way to the semi-finals… Martin Peters added a second after forty-nine minutes and, for over an hour, things were looking good.

Patrick Burke:
After the second goal – when we went 2-0 up – I was feeling pretty good.

Peter Logan:
We just kept seeing the score come up.

Jasper Cook:
I do remember at 2-0 up we were playing so well – we were cruising. That was the most disappointing thing of the whole trip I suppose.

Peter Logan:
When we saw that England were 2-0 ahead, all hell was let loose. We were in ecstasy. It looked like we was coasting… There were quite a few England fans who’d stayed in Guadalajara…

Alan Mullery:
Franz Beckenbauer pulled one back after sixty-seven minutes… A soft goal, a real sickener that definitely shook our confidence.

Patrick Burke:
When they got the first goal back the momentum was with them.

Jasper Cook:
It wasn’t until they actually pulled one back that I thought ‘Oh God, no…’

Patrick Burke:
Some people blamed Ramsey for taking off Bobby Charlton when we were 2-0 up but, of course, (Bobby) Charlton, being no youngster, was being saved for the semi-final.

Jasper Cook:
I thought when Alf did the changes, ‘has he done the right thing?’ It was 2-1 but even so, we could have scored another one or two.

Alan Mullery:
Some have criticised Alf, saying that by taking Bobby Charlton off, he freed Beckenbauer to score that vital goal. The fact is that Bobby was still on the field when Germany scored. Alf took Bobby Charlton off a couple of minutes later and sent Colin Bell on to give us a fresh pair of legs in midfield.

Peter Logan:
Our joy turned to dismay as the Germans drew level. Remember, all we had was the scoreboard at Guadalajara to go by… The Brazil / Peru game finished before the England one because Brazil had won 4-2 in the 90 minutes.

Jasper Cook:
Before extra-time started I still thought we had a good chance to win – like in ’66.

Alan Mullery:
Alf got us together at full-time and said what he had said in ’66. ‘You’ve won it once, now go out and win it again’. But it was less convincing this time. It was 100oF in the shade and the England players were physically drained.

Peter Logan:
And then they scored in extra time…

Jasper Cook:
We couldn’t believe what happened at the end.

Stanley Lewis:
Bonetti didn’t play very well. Didn’t have a lot of help in defence. Labone – he didn’t play very well either. It was a good team on paper. But it was so hot out there. The worst thing that Ramsey done was he took Bobby Charlton off. Beckenbauer had just been following him all round the park. Everywhere he went, Beckenbauer went. But when he (Charlton) went off Beckenbauer ran the game. Everything went through him. They just ran amok after that. We were 2-1 up went Charlton went off…

Alan Mullery:
… We all sat in the dressing-room in silence… The truth was that we had been 2-0 up and, as a team, we should have held on to that.

Peter Logan:
If I remember rightly, I think it was on the bus that we found out that England had lost. From a distance, and not knowing anything really about the match apart from the result, it seemed like it’d just all caved in…

Patrick Burke:
No doubt in my mind that Bonetti was to blame. He was hesitant. When a ball comes across your goal towards the far post you come out and get it. He was caught in two minds. Then again maybe somebody should have been marking Muller. It’s a collective thing really, isn’t it…

Jasper Cook:
I was so disappointed…

Alan Mullery:
We had cold showers, put our tracksuits on and went back to the hotel.

Patrick Burke:
I felt England did everything right – but for some indecisive goalkeeping.

Alan Mullery:
That fateful day in Leon would ultimately turn out to be the most disappointing day in my whole career.

Patrick Burke:
I shook hands with some German fans. Said ‘well done’ and that. Then we made the long journey back to the motel.

Stanley Lewis:
We were down in the dumps. Tail between our legs. We just got the coach back to the hotel.

Jasper Cook:
We got on the coach and headed back to the motel in Guadalajara. But when we got there the Brazilian press people were all in the swimming pool fully clothed celebrating there ‘winning’ the World Cup! You see we were the only team they feared. And we said “What’s going on?” They said, “Sorry, but we are so happy!” We probably just had a quiet drink.

Patrick Burke:
Speaking to some Brazilian supporters I came across later in Guadalajara, they said they were glad England had been eliminated. We were the one team they feared. Looking back now it easy to see why. As I say, we could have won or drawn against them in the Group match. We gave them their hardest game. Brazil played 5 times in the whole tournament. They scored 4 times in three of their games and 3 goals in another. But they only scored once against England.

Jasper Cook:
It was from a Belgian journalist who was also at the motel that we got some information following the game. We said we were very disappointed – we had been playing so well and felt we were on our way to win it. We asked if he had had any indication as to why England had made the changes? I mean, it wasn’t as if we’d put two duffers on in midfield. As a team manager I would think twice about it. If my side were playing well I wouldn’t want to make changes for the sake of it – which some managers do. But he said it was all part of the plan. Basically, if Alf hadn’t had made the changes when he did, (Bobby) Charlton and Peters would not have been fit enough to play in the semi-final. He told us the next day that Ramsey would have made the same decision if the game had come up again.

Patrick Burke:
Some fans were desolate but I wasn’t too upset. It wasn’t ‘end-of-the-world’ stuff… No point in crying your eyes out… Our defeat was just one of those things.

Stanley Lewis:
I thought, ‘Sod this. It’s all finished. What’s the point?’ I wanted to go home. I said to my mate, “If we go to the Aztec. Just stand there with our tickets, someone’s bound to come up. We can flog them.”

Jasper Cook:
It had been a long disappointing day.

Alan Mullery:
We sat by the pool and Alf ordered champagne. We all had a glass and Alf thanked us for what we had done in the tournament. He said he was very proud to be our manager. I felt sorry for him. He was obviously bitterly disappointed, but carried it with dignity as always… The FA gave us all the opportunity to stay on and watch the semi-finals and final, but I had been away for six weeks and I was missing (my wife) June and our little girl, Samantha. Inside two days I was on my way home.