Alan Mullery:
… I was included in Alf’s World Cup ‘get-togethers’. These gave him a chance to assess the top forty players in the country. I always felt on the fringe of these events and didn’t play in any of the friendly games… I was bitterly disappointed when I was left out of the final World Cup squad.

Patrick Burke:
I went to all the England games plus one or two others. As far as I remember the tickets were advertised and you didn’t have to be a member of any supporters group or club.

Jasper Cook:
I was working for a local estate agent at the time. We had booked tickets. But the tickets we booked did not guarantee us a ticket to the final. When the tickets came through we found we’d only got one to the final.

Patrick Burke:
The opening game (against Uruguay) was the first time I’d seen England play in the flesh.

Jasper Cook:
A friend, Alec, and I were in Austria for the first week of the tournament and we watched most of the games on Austrian television. In Saltzburg we met the manager of the Edinburgh Universal Stores. He didn’t say too much about Scotland’s involvement and absence from the finals! However, I told him that Alec and me had only one ticket for the final, to which he said, “You’ll have another one. Get me a postcard”. He wrote to his secretary in Edinburgh and he said on it – Please send two tickets for the World Cup Final to this address. In the end Alec’s father had the one ticket that we had originally got and, sure enough, Universal Stores sent us the two tickets to the final. We got back from Austria on the Saturday morning and went straight to Wembley for the England v Mexico game (the second group game.).We saw all of the remaining England games including the final.

Peter Logan:
There was one game we went to at the White City (Uruguay v France). Again we were miles from the pitch. It was never a football stadium! How they ever played a football game there – let a lone a World Cup game… They wouldn’t do that these days. I also went to Sheffield. I think it was Switzerland and Germany at Hillsborough. There was Aston Villa as well. Forget who that was… Frank Nottage – who I went to Mexico with – he came to some of the games. I took the car to Sheffield and Birmingham and that.

Peter Logan:
Another one I saw was the semi-final at Everton (W. Germany v Russia).

Stanley Lewis:
I watched it on the television at home. With my dad and my mum and my brother. I never really went into pubs for football because you couldn’t hear it, and I want to listen to the pundits before & after.

Peter Logan:
There were a lot of thoughts about Jimmy Greaves and Geoff Hurst in ’66. And a lot of people didn’t like Roger Hunt. Alf did. And he was proved right because they won the cup. That sort-of shut people up. But Greaves, at that time, was goalscorer number one really.

Patrick Burke:
At the final we never thought we were going to lose.

Jasper Cook:
That day… it couldn’t have been better…

Peter Logan:
That was brilliant that day.

Patrick Burke:
I remember it was overcast and back then people still dressed-up – collar and ties etc… I got the 47 bus from Surrey Docks, up to Liverpool St and then got the tube to Wembley Park.

Jasper Cook:
For the final we were standing behind one of the goals. 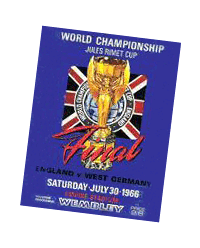 Peter Logan:
I was standing in Block G 67. Up in the top tier – the opposite end from where they come out – the scoreboard end where Geoff Hurst scored the fourth goal. I made a point of getting there early so I was virtually about half way up the top tier – rather than being up the top where the roof meant you sometimes lost the ball if it was up in the air. I remember I was once down the front on the lower tier. You were virtually looking at their feet. Terrible view. I always like to see the shape of the game.At the end I remember the Stadium didn’t empty very quickly. People didn’t have cars and it was the usual chaos at Wembley Park Station. I just came home and watched it on the telly in the evening. I was never one much for drinking and that.

Alan Mullery:
I was delighted by the win, but disappointed not to be part of it all. It sharpened my England ambitions. When my next chance came, I’d be ready.

Peter Logan:
If England hadn’t won the World Cup in ’66, I probably wouldn’t have gone to Mexico.

Stanley Lewis:
After we won the World Cup in ’66 – everyone got interested then!

Alan Mullery:
I watched the game at home on TV, like millions of others.

THE PLAN TO GO TO MEXICO ⇒