Stanley Lewis:
Between one of the games we decided to do this trip. It might have been off our own back – rather than one of the organised excursions. It wasn’t that far. You just kind-of went up in the plane – over the mountain – and down. Anyway, they’d made a film there – ‘Night of the Iguana’* a few years before.

* This was the 1964 film based on the 1961 play of the same name by Tennessee Williams. It was directed by John Huston, and starred Ava Gardner, Deborah Kerr and Richard Burton – who brought along his wife-to-be Elizabeth Taylor for the duration of the shoot. A statue of John Huston stands in the town – acknowledging the film’s role in making the area a popular tourist destination

When we arrived the three of us walked into the airport lounge. I tell you, it was so hot. And there was this huge ceiling-fan, and we all stood under it for a bit to cool down. Then this middle-aged bloke comes up to us and says, “You English?” We went, “Yeah.” He spoke good English and he went, “For the football?” Again, we tell him, “Yeah.” “Where are you staying?” It turned out he’s the night receptionist at the same hotel. So, he says, “You come with me in the cab and I’ll take you there.” So, we get to the hotel and there’s the main-man [the manager] of the hotel at reception. All very friendly. So, we got our key and when up to our room. Wasn’t dark as I recall. It was dusk. About 5 or 6 o’clock. We threw our stuff on the bed and went out to have a walk around the town – have a beer.

The town itself… Well, there was all, like, huts. They didn’t have doors, they had these beads hanging down. And as you looked in you could see the mums doing the cooking, the kids running about, and I thought ‘Cor blimey!’ You know… What a way to live! But it was just normal outside the city I suppose.

Anyway, as we walked further there was this solid-looking building with bars on the window. We guessed it must be the local ‘nick’. But as we pass this [police] bloke comes out and he says, “Hello. What are you doing here?” So, we told him – you know – we’re here for the football. So, he says, “You English? Where you staying?” We told him the hotel. Then he went, “You got drugs. You do drugs.” So, I says, “Leave off! We’re Inglaterra. World Cup football!” Then he calls out and another [police] bloke appears. And before we know it, we’re being put in the back of this [police] car and driven to our hotel. Don’t know what we was thinking. I suppose we was naive. Just doing what we was told.

So, we’re marched into the hotel and there’s a bit of chat between the police-blokes and the bloke at reception. Couldn’t understand them – but then the reception bloke gives them the key [to our room]. We go up in the lift, and into our room. So, we’re standing there and one of the [police] blokes vanishes into the little bathroom and comes back with this bag in his hand. Full of white powder. And he goes, “Here are the drugs.”

Obviously, the bloke at reception had told the manager as they both come up and appear in the room. And the manager’s doing his nut at the police blokes. Lots of shouting and stuff – and we’re just standing there, you know, wondering what’s happening. Then the manager makes it clear that the police blokes should leave. You know, “Get out! Get out of my hotel!” – but in Mexican, obviously. We could get what he was saying though.

So, anyway, these two coppers eventually leave, and the manager bloke turns to us and apologises. You know, that he’s very sorry with what they done to us and that they was trying to stitch us up. He’d told them that we was only staying here for the one night, and that we’d be leaving tomorrow. But then he gave us a load of instructions… like rules… “You will leave tomorrow. You will stay in this hotel. You will not go anywhere else. The only other place you can go is onto our private beach.” They had this private beach backing onto the hotel. But he was doing it for our own good I suppose.

Anyway, that’s how we got out of it. Frightened the life out of me, I tell you! It was only the fella at reception that took us in the taxi to the hotel that knew that we’d only just arrived. We was just about to walk out the room with the coppers. We could have been like ‘Midnight Express’ – but in Mexico. We were so lucky…

Why’d they do it? Maybe they wanted money? A payoff? I reckon that’s what they would have tried if they’d got us back to the ‘nick’. Some kind of bribe. And the hotel manager obviously didn’t want any kind of trouble. Bad for business. That’s why he helped us I suppose. Who knows?…

I tell you, I couldn’t wait to get out of the place! 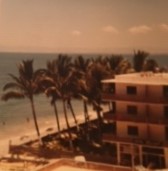 So, we did as we was told and just went down to the hotel bar. Then who walks in? The police fella from the supermarket in Guadulajara! He’d said he would see us here! So, after saying hello and that, we went, “How d’you get here?” Turns out he drove. And because we had flown, he thought we was loaded! He thought we was rich! Of course, I told him we was two dockers and a decorator…

We told him what had happened. He didn’t seem surprised. Probably happened all the time. And – as he was a policeman – he told us that we were very lucky and to stay here [in the hotel].

So, that’s what we did. Just stayed in the bar. In the morning we came down, had our breakfast, went on the private beach and then got a cab for our plane. We made sure we got the bloke at reception a nice drink, cos if it hadn’t been for him…

We were naïve. Just being law-abiding and doing what we was told to do in a foreign country. They [the local police] must have seen us as easy-picking…